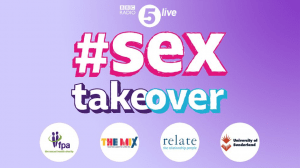 Students from the University of Sunderland are getting ready to join an all-star panel to get personal.

As part of the UK’s biggest conversation about sex, media students and staff from the University will be joined by I’m a Celebrity winner and Geordie Shore star Vicky Pattison, along with Embarrassing Bodies presenter Dr Christian Jessen.

Hosted by BBC Radio 5 Live’s Anna Foster at Sunderland’s National Glass Centre, the group, along with a celebrity panel, be discussing sexual health, sex and relationships, sex and society and the future of sex.

Dubbed the #sextakeover – the conversation about the nation’s sex life will focus on three main areas; sexual health, sex and society, and sex and relationships.

5 Live teamed up with the University Sunderland to host the high profile interactive audience debate with experts and the community talking honestly about the issues. Students are also helping to produce the event for the radio station.

Jenny Wotherspoon, Programme Leader Social Media Management at the University, said: “It’s brought up some really interesting conversations and debates among students who, it turns out, do not usually discuss sex and issues around sex openly among friends.

“It’s pushed them as journalists to explore, research and conduct interviews with people about issues that are outside their comfort boundaries, looking at everything from case studies of young people paying for sex and conversations about sex among people with disabilities to the influence of reality TV on perceptions of sex.

“It’s been great for students to be part of this and build those links with the digital 5 Live team.”

A spokesperson for BBC 5 Live said: “You’ll hear some really honest – sometimes eye-opening, sometimes hilarious – conversations across 5 Live all day.  From the business of sex on ‘Wake Up to Money’, to how to do it better, and real-life stories and celebrity co-hosts throughout the day.  We’ll also have an exclusive survey of attitudes to sex in 2018 – who are enjoying it and who’s not, and what we are all really getting up to.”

The discussion between students, staff and the panel will take place at the University of Sunderland’s National Glass Centre between 12pm and 2pm on Tuesday November 20.

People can follow and join in the debate using the hashtag #sextakeover on the day.